Conceptual Illustration took my art brain for a spin. It was the first time I tried to create an image to tell a detailed idea or story. Each assignment built on the last teaching us to stretch our minds a little more each time.

The course started out with us talking about symbols and how changing the texture, color, size, placement, and so on of an object could change how we viewed something within an image. Class was filled with Pictionary games to make us think. What was pressed over and over was to keep it simple. In fact our teacher often said, “keep it simple stupid” all the time as we began to work on ideas for assignments.

Class often started with us reading the newspaper. We would go around and talk about a notable article or one that stuck out to us and then talk about good ways to illustrate the concept as clearly as possible.

Our first assignment was to pick one of the seven deadly sins and somehow illustrate its concept in a way that we could figure out which one we chose.

Could you figure out which one I chose?

Envy, if it wasn’t obvious. While I wanted the stickies stapled on her to imply how deeply she wants what other’s have I kept it “simple.” The original image was actually wide instead of tall but as I progressed through the assignment it became evident I hadn’t really zoomed into my message as close as I could. I was filling the image with details that only distracted from the idea/message. This assignment was done digitally using Corel Painter 2015 which I love for its imitation of actual mediums like oil paint, acrylic, gauche, and more. I find this program does a nice job representing pressure correctly. I often have a hard time in Photoshop because it doesn’t catch the initial press of the pen onto the tablet instead just putting down the whole brush shape. Mind you I’ve messed around with the pressure metrics in Photoshop but I just find it isn’t as responsive.

Assignment two was to find an article in the newspaper and then illustrate it. You can image when this assignment was given based on my illustration. I found one which spoke about Volkswagon lying about their emissions. I wanted to really take my teacher’s lesson’s to heart and stay simple. 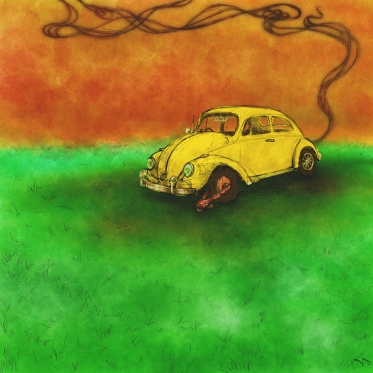 If you’ve heard of Mucha I wanted to copy his style of smoke. I wanted it to be beautiful despite the negative connotation behind bad exhaust.

My third assignment had us choosing an idiom. I decided on “light as a feather.” By this point in the class I started really getting into my assignment and putting my opinions into the mix. If it isn’t obvious I believe the U.S. has a growing problem with pharmaceutical drug addictions so I took that approach to the meaning of this idiom.

My final assignment in this class was to illustrate something around the events of November 2015 Paris attacks. There were many illustrations coming out during the time of this assignment and it was truly beautiful to see the out poor of support all around the world.

If you’ve ever heard of Banksy then you can see my influences here. I wanted it to appear as graffiti painted on a building wall somewhere as an expression of the people.

All of these assignments were completed using Corel Painter 2015. Studying Conceptual Illustration was an amazing experience. One where I learned a great deal about symbolism and how to converse with the deeper meanings of things that lie within ourselves.

Leave me a comment I would love to hear your thoughts.

I'm currently a student at UVU going into illustration. Somewhere along the way I hope to achieve greatness so I track my progress. View all posts by emsilay4