I remember watching cartoons as a kid and being enthralled by the characters. I wanted to watch every episode of my favorite shows and just live the excitement. Now, being a younger child in my family left me watching cartoons which my older siblings initially watched. Shows like Johnny Quest, Teenage Mutant Ninja Turtles, Gargoyles, Mummies Alive!, Street Sharks, and on and on.

You can imagine my excitement when I was assigned to re-create a hero from my childhood. The problem was picking just one! The challenge here was that we couldn’t just re-draw a screen shot from our favorite show. We had to re-design the character and place them in a scene all our own. While we didn’t have to re-invent the story we were tasked with making our own version of the hero. We were allowed to use reference images of the character but in the end it had to be obvious we weren’t just re-painting our favorite poster image.

After a long and hard battle between which hero to choose I finally decided on Ja-Kal from Mummies Alive!. Now the real battle had begun. I started doodling ideas of armor and studying the city in which the show takes place, San Francisco California. To help me brainstorm I would write out lists of words that would come to mind to describe my character, story, or location.

It was a hard toss up between two different compositions. I liked the idea of him standing on a trolley with a view of the street angled down towards the bay. I also liked the idea of him in the stoic pose overlooking his city. To help me decide I did some searches of San Francisco and just looked through the many images so see what inspired me. I came across a beautiful image looking over the city with the Bay Bridge in the background. It was a cloudy night scene with the moon just peaking through. I had found my muse.

I decided to try out a new board for this assignment. I went to a local hardware store and had them cut me several masonite panels. The boards were roughly 16×24 each. I gessoed the board and then sanded it to reduce the texture. I wanted to have more control in my details. My next step was to sketch it out onto my panel.

Once I had a rough pencil sketch it was on to blocking in my values. 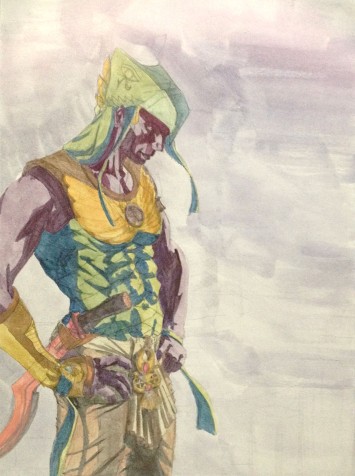 I found out quickly how much I hated painting clouds in acrylic. I kept layering my details adding in more specific colors as I went.

Now with a little more attention to some smaller areas like the sword, belt, & helmet. At this point I had given up on the clouds and was just praying my teacher would have some nice pointers come judgement day.

Ah the finished piece. While it is obvious I needed to really study my cloud painting skills. I focused my attention to the character and filling in any areas that really got missed. It is always fun to pull off the tape and see those crisp edges. A tip for any artists struggling with keeping their edges clean from paint bleeding under. Paint your boarder after you tape it down with gesso or white paint. Anything that bleeds under will be unnoticeable and seal off your edge at the same time.

I must say my only regrets with this assignment was my rushed finish. We always say “if only” and I was really doing so with this piece. With more skill and patience I think I could make this picture a beautiful and powerful piece.

Want to see a piece done for this same assignment by another student in my class? Check out his rendition of Rainbow Brite.

A fun little tidbit. I actually tried doing this piece again in a later class. We were learning digital painting and I asked if I could try redoing a piece I had done traditionally. It is really interesting to see the differences between my two mediums and what I do better in each.

Thanks for reading and I hope you enjoyed the pictures. Let me know what you thought in the comment section below.

I'm currently a student at UVU going into illustration. Somewhere along the way I hope to achieve greatness so I track my progress. View all posts by emsilay4

2 thoughts on “Nothing Beats Childhood Heroes”